The DA has in its possession a letter from the Chief Environmental Health and Port Health Services instructing Port Health Officials to stop testing imported chicken products for Listeria.

According to the letter, Minister of Health, Dr Aaron Motsoaledi, announced that the source of the current Listeria outbreak has been identified at cold meats “processing plants located in the country” in reference to the Rainbow Chicken and Enterprises facilities. The Minister therefore thinks there is no need to do any further testing.

Although these two facilities have been identified as sources of the current outbreak of Listeriosis, it still remains unclear how these factories were contaminated in the first place. 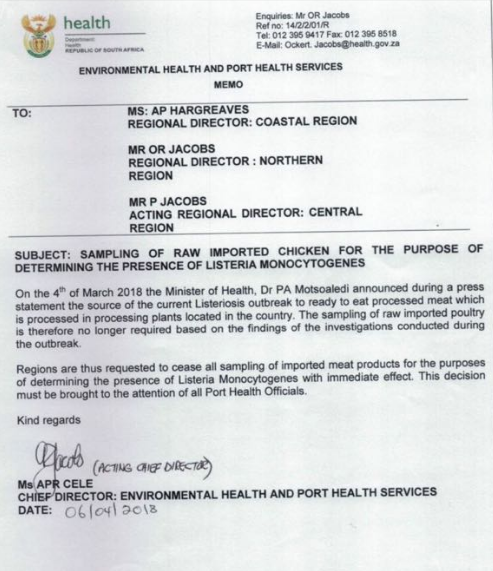 It is outrageous that the Health Department would stop the testing of imported meats, considering that just recently it was revealed that Australia has been exporting Listeria contaminated products. In Brazil, Listeria is not recognised as a notifiable disease and is a major distributor of meat products which South Africa imports.

It is, therefore, vital that South Africa tests imported goods on an ongoing basis to ensure that our people are protected against any possible contamination.

To date, more than a thousand people have been affected by this outbreak and almost 200 people have died. To prevent even further loss of life the government must ensure that the following steps are taken:

The government must put the health and safety of its citizens first, considering that there is still uncertainty of where the listeria outbreak originated from.

The DA will continue to closely monitor this Listeriosis outbreak and hold Minister Motsoaledi accountable, as it is clear that there is no political will to get to the root of the problem.