Let’s take a look at how the Democratic Alliance performed in Parliament in 2020 – a year in which the COVID-19 pandemic showed up how eroded our country and our government have become under the ANC, and a year in which the DA outperformed the rest carrying out its constitutional duty to hold the Executive to account.

The role of Parliament is twofold: it must pass legislation and it must hold the Executive to account by conducting effective oversight. Much of this oversight function is achieved through parliamentary questions.

The Economic Freedom Fighters (EFF) submitted 514 questions (18 %) of the total 2 860 written questions at an average of 16 questions per opportunity.

The Inkatha Freedom Party (IFP) submitted 192 questions (7 %) of the total 2 860 written questions at an average of 6 questions per opportunity.

The Freedom Front Plus (FF+) submitted 160 questions (5.6 %) of the total 2 860 written questions at an average of 5 questions per opportunity.

Other opposition parties asked a total of 81 (2.7 %) questions this year.

DA parliamentary questions in the news

Following the DA’s question to Minister Sisulu on the positions filled in her Ministerial Office as well as the Water and Sanitation’s Ministerial National Rapid Response Task Team, their qualifications and remuneration, it was revealed that Mo Shaik and Menzi Simelane were appointed as special advisors to her office.

The DA then went on to file a complaint at the Public Service Commission to investigate the appointments of Simelane and Shaik. The Party also filed a PAIA application to request the salaries of these individuals and others working in the Minister’s office. This after her office refused to disclose their salaries.

Days after, the Minister then tried to cover up and released an amended response which omitted the names of employees.

Information that Minister De Lille’s Advisor, Melissa Whitehead, was alleged to be closely involved in the Beitbridge Border Fence debacle came to light in a reply to a parliamentary question from the DA to Minister Patricia de Lille.

The DA used this, and other information, to put pressure on Minister De Lille to be held to account for the ‘washing line’. Until now, she had been absolving herself of all responsibilities in this regard.

While the lockdown destroyed the private economy, the DA revealed how the ANC paid cadres and state employees R11 billion not to work.

This response resulted from a DA parliamentary question in which the Party asked for the breakdown of the number of public servants who continued to be paid from taxpayer funds, even though they had had their workloads reduced significantly.

The Party wanted to know whether the Government was still paying full salaries to public servants whose workloads had been reduced due to the COVID-19 pandemic; if not, why not; if so, what were the relevant details.

This number, as it turned out, was high and cost taxpayers considerably. The ANC had spent over R11-billion in taxpayer money to pay the salaries of at least 84 000 state employees who had had their workloads reduced significantly.

The Minister went on the defensive and threw insults. Calling out Minister Mchunu for his insults, the DA followed up with a statement entitled: Would the ANC have persisted with brutal lockdown if cadres like Senzo Mchunu also felt the pain?

In a parliamentary question, the DA sought to confirm whether the State had been reimbursed by the ANC for their junket to Zimbabwe onboard an Air Force jet during lockdown.

The answer at the time seemed to have implied ‘no’ and this contradicted the ANC’s confirmation earlier that month, that it had in fact paid back R105 000 to the Department of Defence and Military Veterans.

The Minister said that “[any] revenue due to the state flows to the National Revenue Fund (NRF) through departments concerned before it is surrendered to the NRF. As it stands, the Department of Defence is still working on the matter and will inform the National Treasury accordingly once the matter is finalized.”

WATCH: Siviwe Gwarube MP asks the Minister of Health to explain how we find Ace Magashule donating millions of Rands worth of PPE equipment to Cuba

WATCH: Natasha Mazzone MP probes the Minister of Public Enterprises on the latest bailout of the failing South African Airways

Big issues driven by the DA caucus in Parliament this year

At the beginning of the Sixth Parliament, the number and sequence of motions was determined at 23, and number and sequence of members’ statements was determined at 17 for the duration of the Sixth Parliament by the NA Rules Committee, with the DA having three opportunities each for motions without notice and notices of motions, and three opportunities for members’ statements whenever they are scheduled.

Members had four opportunities to raise motions in the National Assembly in the Second Session of the Sixth Parliament. This means that the DA has read out 12 motions without notice and 12 notices of motions, driving issues affecting South Africans.

Members also had three opportunities to raise members’ statements in the National Assembly in the Second Session of the Sixth Parliament.  This means that the DA has read out nine members’ statements on a wide range of topics that needed to be brought to the attention on the relevant Ministers.

On 5 November 2020, the DA had an opportunity to table a debate on the financial burden of sustaining non-profitable state-owned entities and how the Government can reappropriate the continual bailouts used to sustain these entities.

In February 2020, The Chief Whip of the Opposition tabled a motion to initiate an inquiry in terms of section 194(1) of the Constitution of the Republic of South Africa, 1996, to remove Adv. Busisiwe Mkhwebane from the office of the Public Protector on the grounds of misconduct and/or incompetence in the South African Reserve Bank, Vrede Dairy and other matters.

The DA has also successfully tabled three debates on matters of national public importance in the Second Session of the Sixth Parliament:

The DA’s performance in the National Council Of Provinces (NCOP)

A review of legislation

To date, the Democratic Alliance is the only opposition party which introduced legislation in Parliament in 2020.

Apart from these Bills, the DA also has several bills in varying stages of development, which will seek to keep the ruling party accountable and address various problems faced by ordinary South Africans.

The Democratic Alliance also communicated on the following Draft Private Members’ Bills in 2020:

The Criminal Law (Sexual Offences and Related Matters) Amendment Act Amendment Bill, the Criminal and Related Matters Amendment Bill and the Domestic Violence Amendment Bill were introduced in Parliament. These Bills’ objectives are positive and laudable, insofar they represent much-needed and long-awaited legislative interventions to address gender-based violence, femicide and violence against vulnerable persons. However, these legislative interventions are not enough, and the DA will continue to apply pressure on the relevant departments to introduce other measures to protect woman, children and other vulnerable members of the South African society.

A review of Cooperative Governance and Traditional Affairs (COGTA)

“In May 2020, the DA had to write to President Cyril Ramaphosa requesting that he reprimands and disciplines the Minister of Cooperative Governance and Traditional Affairs, Nkosazana Dlamini Zuma, for her persistent failure to account to parliament through the mechanism of parliamentary questions. Dlamini-Zuma’s conduct is emblematic of a tendency that has become entrenched in the Executive, where parliamentary questions are either ignored or answered evasively.

Our submissions to the President called on his office to:

Institute disciplinary steps against Minister Dlamini-Zuma for failing in her responsibility to account to Parliament for the exercise of her powers and the performance of her functions by not responding meaningfully and honestly to any parliamentary questions.”

A review of the busiest committees 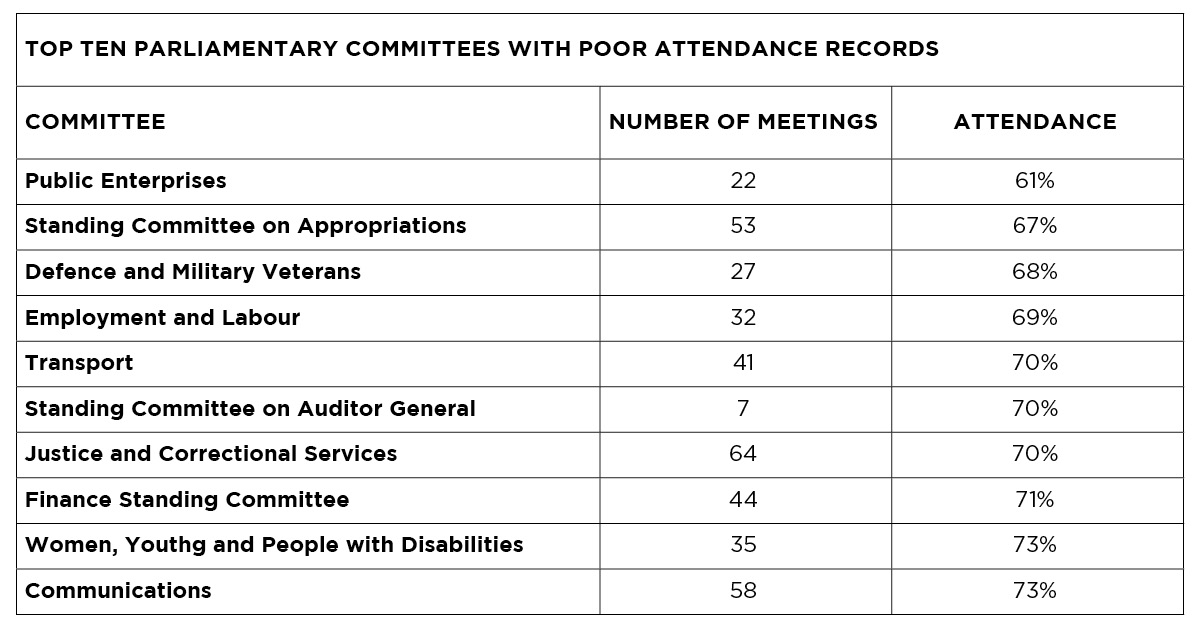 Calendar year 2020 has been unique, not only in the sense that the world, and South Africa, has been faced with a global pandemic, the scale of which has not been seen for over a century, but also in the fiscal context.

When it comes to budgets, the Minister of Finance usually presents two: the Main Budget Review in February, which is the most popular one, and the Medium-Term Budget Policy Statement in October, which is effectively a reactive document that makes the necessary adjustments to the Main Budget.

But this year, at the end of June, the Minister presented Treasury’s Supplementary Budget Review, dubbed by the media and the public as the “Emergency Budget”. The purpose of this very unusual budget review was to reallocate funds for the COVID-19 relief package that the President promised the country.

Come the MTBPS at the end of October, in spite of huge public outrage over whispers that SAA will receive the R10.5 billion recapitalisation package, the bailout was slipped into the budget. Interestingly enough, SAA was only mentioned for the first time in the MTBPS document on page 24, snuck into an expenditure revision table as a sub-category. And to fund the bailout, cuts had to be made to sectors such as healthcare and policing, amongst others. All of this during a novel pandemic.

The outrage at opting to resurrect a dead bird over funding the provision of essential services was immense, yet Minister Pravin Gordhan still thought it best to gaslight those who questioned his lack of morals by brandishing them as “financially illiterate”.

Of course, the outrage was warranted, because in the Main Budget Review in February, SAA also received a R16.4 bailout. Total financial assistance that will be given to SAA in this fiscal year (thus excluding assistance spread over consecutive fiscal years), is over R20 billion.

But SAA was not the only controversial matter.

In the MTBPS, Minister Mboweni effectively announced that government has reneged on its promise to stabilise public debt by 2023/24, pushing the point of stabilisation to 2025/26, thus increasing the odds of South Africa falling straight off a fiscal cliff. On top of interest payments on the debt already consuming 21 cents of every rand generated in tax revenue, the worrying debt prospects outlined in the MTBPS simply served to increase long-term borrowing costs for the government, with the Reserve Bank having to step in through unprecedented purchases of government bonds, not only to assist with the COVID-relief package, but also to try and flatten the yield curve in an attempt to contain the rise in borrowing costs on the bond market for the government.

A parliament for the people?

During COVID-19, Parliament went fully online with committee meetings being broadcast on YouTube. This is essential. Usually, Parliament is accessible to the public, but due to COVID-19 restrictions, visitors could not attend any sittings or meetings. The main way the public could monitor meetings, and thus keeping their representatives accountable, was through watching the live recordings on YouTube.

We thus monitored all the committee meetings for a week to see how many were broadcast on YouTube so that the public could watch it, and the results are discouraging… 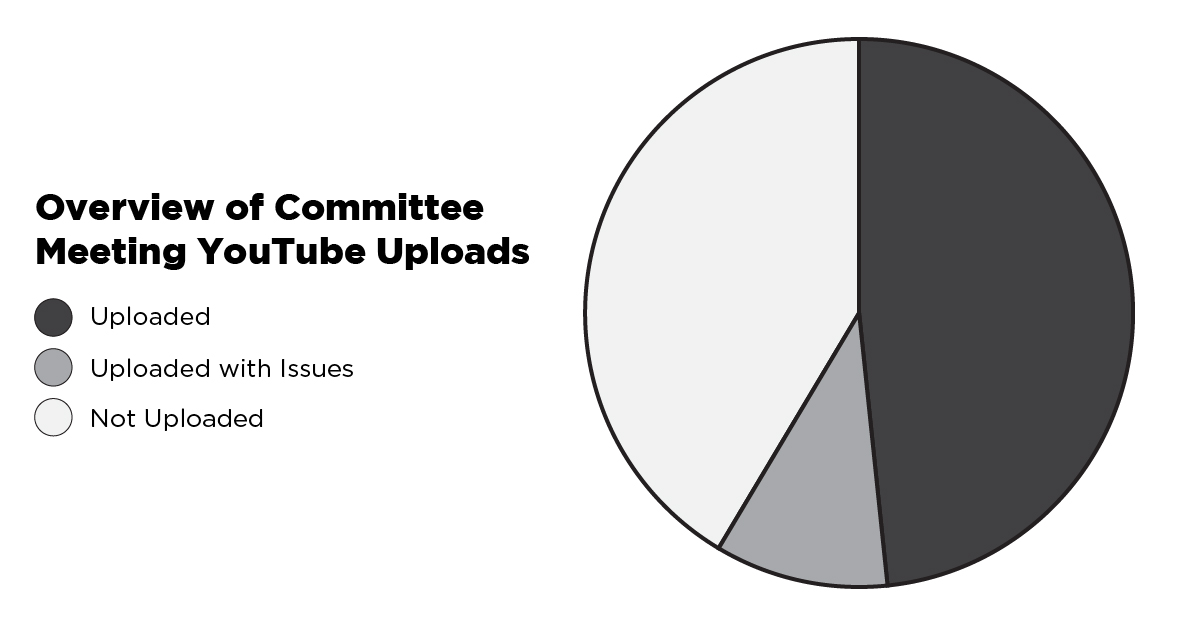